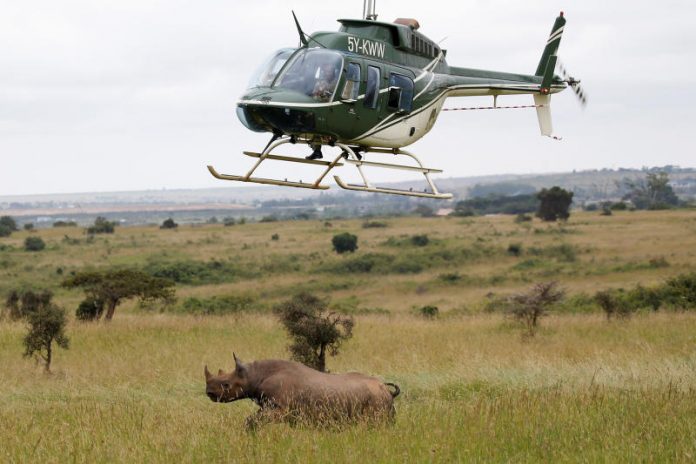 There is never a dull moment in the life of Captain Mumiah Elijah Anyonyi, the Kenya Wildlife Service’s (KWS) Chief Pilot. He is a utility pilot who flies both aeroplanes (fixed wings) and helicopters (rotor wings). “Unlike a commercial charter pilot”, says the ex-military pilot in an interview, “you almost never know what to expect when you report for work. You may be called upon to fly to any part of the country on rescue or combat missions. Then there are the usual game counts, captures and, recently, animal translocations. All these are very challenging and exciting.”

For Capt. Anyonyi, a normal day begins with flight coordination and briefings with the Assistant Director, Airwing, Chief Pilot Phil Matthews, the day before any flights. The Captain then briefs other pilots and assigns tasks. The briefing covers such information as the destinations and departure times, and a detailed outlay (strip data) of the landing airstrip. When the Captain is engaged to fly, he carries out a thorough preflight exercise that includes checking and computing for his fuel requirements and working out a weight and balance sheet to ascertain that the load or pax is within the aircraft carrying limits.

Thirty minutes prior to departure, the Captain ensures that a Flight Plan has duly been filed with the Directorate of Civil Aviation’s Air Traffic Control offices. Once satisfied that all is in order, he boards the aircraft and briefs his passengers on the flight duration, emergency exits and “other relevant dossier for the good comfort of the people on board”. He starts the engines and requests the Control Tower for clearance to take off.

Once he reaches the target area on game counting or survey flights, he flies low – sometimes as low as 200 feet above ground level! There will be an observer in the aircraft on the lookout for animals on the specified transect within a defined block to be counted.

“In cases of big herds, photographs are taken. These help as the animals are constantly in motion but one can headcount them on a picture,” Capt. Anyonyi explained, adding that the Global Position System (GPS), also known as the Trimble Navigation System, which they now use ensures a higher degree of accuracy in the excercise.

If he is on an animal translocation mission, Capt. Anyonyi flies a helicopter and takes on board a marksman and a veterinary doctor with their darting gadgets. He hovers very close to the ground, keeping in a position that will allow the marksman to dart the animal (to be immobilised for translocation) in the right place. This calls for very special flying skills.

Once the animal is darted, he communicates with the ground team, directing them on the route to take to close in on the animal.

Capt. Anyonyi joined the military as a Flight Cadet soon after his high school studies. He was initially trained at the Kenya Armed Forces Training College (AFTC) at Lanet, Nakuru then went to college in Texas, United States where he attained a Diploma in English. He then moved to Fort Rucker, Alabama, US, for further training as a combat pilot. He returned to Kenya in 1983 and worked for the military until 1992 when he left to join KWS as a line pilot.

Asked about the most exciting moment in his career since joining KWS, Capt. Anyonyi looked rather amused given that almost every moment in his work is exciting. In the end, he settled for those times when he is supporting ground staff during translocations or when fighting bandits (poachers).

And the most scaring moment? Flying in stormy weather. It happened to him in 1993 on a night flight from Sibiloi National Park, Lake Turkana. “But composure and confidence are all you need”, the confident captain said. “You circumvent the weather and before you know it, you are on less crowded space”.

Capt. Anyonyi, who at the time of the interview had 5,000 hours to his credit, says he enjoys his work tremendously.

“It is never boring. You are exposed to a whole range of different things. And everyday, you learn something new”. Comparing his work to that of a commercial charter pilot, he says his is more challenging, demanding and ultimately more fun. “For a charter pilot, flying is straight forward. He knows what he will be doing each day and follows the same routes all the time. In KWS, you operate in dangerous zones. You do not know what to expect when you report for duty in the morning. You may, for example, be called upon to help combat banditry. It all means that you require quick planning and quick thinking.”