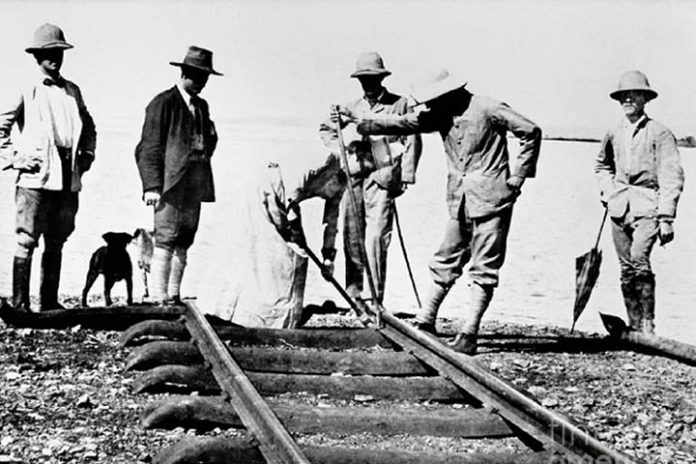 On May 30, the Uganda Railway celebrated its 100th birthday, a very special occasion as it is not just another railway. The story of its construction could have come out of a Hollywood film (in fact the story of the railway is currently being filmed in South Africa), but every drop of blood, sweat and tears that went into its construction are as real as the earth we stand on. It is still very much in use a century later, having endured several attacks by the Germans during World War I, and witnessed countless natural and human disasters.

Running 576 miles northwest from Mombasa, the historic port on the Indian Ocean, through a semi-desert to highlands rising up to 10,000 ft. on the equator and down to the bed of the Great Rift Valley, before reaching Kisumu on the shores of Lake Victoria, the railway line opened up East Africa to the rest of the world.

The British laid the first rails of this famous line in Mombasa on May 30, 1896. Five million pounds sterling, 43 stations, 1200 bridges, five years and countless lost lives later, the railway line was completed. Not only was it an amazing feat in railway construction history but also a long and hazardous task where every conceivable problem arose.

The Uganda Railway was also known as ‘The Lunatic Express’. During the discussion of the project’s proposal in England, a Member of Parliament stood up and referred to it as “The Lunatic Express”. In his opinion, it was a ridiculous idea: not only were its costs extravagant but in the late 19th century there was “nothing but bush and savage people” in the land mass that we now refer to as Kenya.

Many people in England were very sceptical about the railway and there was strong opposition to the project. The original idea behind the Uganda Railway was to keep the Germans, then occupying present day Tanzania, from controlling the source of the Nile.

When the approval was given, the British brought in materials and thousands of labourers or “coolies” from India which already had a vast railway network. George Whitehouse, a prominent British railway builder, was put in charge as the Chief Engineer. Despite his knowledge and wealth of experience he found himself unprepared for the challenge ahead.

Crossing the Great Rift Valley: “The locomotives were not designed to cope with a gradient more than two-and-a-half degrees”.

Among the first major problems was how to cross the creek between Mombasa island and the mainland. This was solved by the construction of a wooden trestle, then a steel girder bridge, and much later by a causeway. The workforce moved further inland constructing the first 90 miles through the coastal strip, before they had to cross the Taru desert, a very dry semi-arid area. Water had to be brought up by rail from Mombasa. There were other problems: massive floods washed away the lines, termites feasted on the sleepers, caterpillars caused trains to derail, sleeping sickness caused by tsetse flies decimated herds of oxen that were at one time used to haul material and, worse, a great number of workers fell ill mainly with malaria, amoebic dysentery, jungle sores and pneumonia.

Disaster struck again when the line reached Tsavo (the Kamba word for slaughter). Although the line had an insufficient budget and was already behind schedule, work was held up at Tsavo for almost a year by two intelligent man-eating lions. They killed 28 coolies and numerous African workers.

Further down the line at Kima, an Asian Station Master once telegraphed for help: “Pumping-engine employee wickedly assassinated by fractious carnivore. I unable to pacify it. Situation perilous. Implore you alleviate my predicament”. That particular lion had terrorised the locals for quite some time. It even killed Superintendent Ryall of Railway Police who had been sent to hunt it down. When it was eventually trapped it measured 11 ft. from head to tail.

Today the railway plays a vital role in the economy.

The Colonel in charge at Tsavo, J.H. Patterson, who shot the man-eaters (and later wrote the book The Man-Eaters of Tsavo) was told by the Indians minutes before they jumped on a train and ran away, “We will remain at Tsavo no longer for anything or anybody. We have come from India on an agreement to work for the Government, not to supply food for either lions or devils!” When Mile 326 was reached in 1899, what was later to become Kenya’s capital city, Nairobi, was established as the Railway Headquarters. Workshops were set up in readiness for the challenge presented ahead by the Great Rift Valley. Nyrobi, as it was then called, was a flat swampy area. In Maasai it meant “a place of cool waters”. (Some translations have it as “a place of sweet waters”.) It grew and prospered becoming Kenya’s capital in 1905.

The next obstacle soon presented itself: the railhead reached the lip of the Kikuyu escarpment, overlooking the Great Rift Valley some two thousand feet below. In places, the escarpment wall sloped at an angle of 45 degrees, presenting a major problem as the locomotives were not designed to cope with a gradient of more than two-and -a-half degrees.

This did not discourage the engineers. A rope incline in four stages was set up and all materials and equipment was shunted up and down the hill in specially built cable cars until a more gentle gradient was carved out of the hillside.

How did the African communities react to ‘The Lunatic Express’? Some were hostile, attacking and even killing several Indians. Interestingly, though the British had among other reasons stayed on the coast for so long without venturing further inland due to the hostile tendencies of the Maasai, these nomadic people got on well with the workers.

There is a theory that to several African communities, the railway was fulfilling an ancient prophecy that an iron snake would one day cross their land from the Lake of Salt (Indian Ocean) to the lands of the Great Lake (Lake Victoria).

When on December 20, 1901, Mrs. Preston, wife of the construction engineer drove in the final stake on the shores of Lake Victoria, the Uganda Railway became a great achievement. But how was it going to pay for itself? The answer was agriculture. After World War I, a call went out to all corners of the British Empire for “men of courage and enterprise” to come and settle in Kenya. The response was overwhelming and so the White Highlands began.

Though the railway took another 58 years to pay for itself, it literally laid down the infrastructure that opened up the region.

By the 1920s the railway could hardly meet the demands placed on it to move goods. The authorities were forced to lay heavier rails on the main line in readiness for more powerful engines and rolling stock. The largest locomotive ordered was the huge “Mountain Class” weighing 250 tons with a capacity to haul a 1,500-ton train up from the coast. Branch lines were laid to major farming areas, and completely knocked down parts for ships ordered from Britain were railed to Kisumu where they were assembled and launched on Lake Victoria.

In 1931, the railway reached Uganda with the completion of the Nile Bridge – another engineering feat. Between 1948 – 1976 the operations of the ports and railways of Kenya, Uganda and Tanganyika (Tanzania) were combined under the East African Railways and Harbours.

The first diesel engines were put into operation in 1950 but the steam ones were to remain in operation until the 1980s when the last ones were withdrawn.

While in Kenya, a visit to the Railway Museum and an overnight train trip to and from the coast bring to life the story of one of Africa’s most famous railway systems.