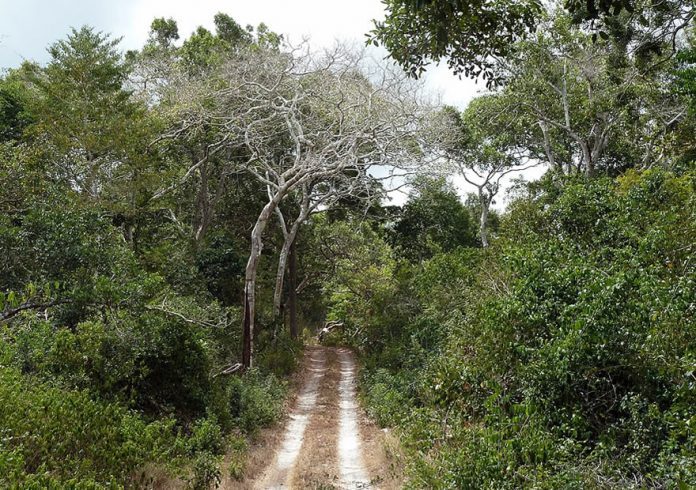 The Arabuko-Sokoke Forest Reserve in Kilifi District, some 120 Kilometres North of Mombasa, is the largest surviving stretch of coastal forest in Eastern Africa. It covers 420 square kilometres. Arabuko-Sokoke, which is among key forest reserves in Kenya under joint management of the Kenya Wildlife Service (KWS) and the Forestry Department through a Memorandum Of Understanding (MOU), is famous worldwide for its unique flora and fauna.

Together with the adjoining Mida Creek, Arabuko-Sokoke comprises an ecosystem of great diversity, containing many rare species of birds, butterflies, amphibians and plants. It is also more than a superb area for poles, timber, medicines as well as an important source of water and a base for a community butterfly farming project. There are five butterfly species found nowhere else in the world but at Arabuko-Sokoke.

In order to ensure the survival of this unique forest, and manage the different demands upon its resource in a balanced way, KWS and the Forestry Department jointly established the Arabuko-Sokoke Forest Management Team to enhance the conservation of the forest. Through the joint efforts of KWS and the Forestry Department, communities around the reserve are now getting significant benefits through new innovations in butterfly farming. In addition to the forest based resources which are accessible to the community, the management team is also working hard to assist in the provision of water and support to local schools and health facilities. All these benefits will only be sustainable by effectively conserving and maintaining the integrity of the forest without further degradation or loss of land area to other forms of use through excisions.

While Arabuko-Sokoke is home to a large number of fascinating dudus (invertebrates) as well as varied populations of snakes, lizards, frogs and toads, it is for its diversified bird life that the forest is locally and internationally renowned. With a high concentration of endangered bird species, Arabuko-Sokoke is classified as one of two most important sites for bird conservation in Africa (the other one is in Zaire).

Altogether there are some 230 recorded bird species in the forest, including some of the most unusual or peculiar birds. Some of the rare species, include the Amani Sunbird, Clarke’s Weaver, Sokoke Pipit, Spotted Ground Thrush, Sokoke Scops Owl and East Coast Akalat. Clarke’s Weaver is found nowhere else in the world.

Sokoke is also home to some 40 mammal species. For two of these, the Golden-rumped Elephant shrew and the Sokoke Bushy-tailed mongoose, the forest is their last stronghold.

At first glance, many of the forest’s trees, shrubs and ground cover plants look similar to each other but there is actually a great botanical diversity. Recent surveys have produced nearly 600 plant species. As scientists progressively identify more species, the total number of different plants may well approach 700.

In addition to creating a sanctuary for thousands of other forms of life , many of the plants are of great economic value. Apart from timber, bark is used to make string, and a varied range of leaves, fruits and roots are gathered for food. Mushrooms are abundant after good rains. More than a hundred plant species are used as medicines and cures. Local herbalists depend on the forest for all their raw materials.

Through the management team, KWS and the Forestry Department have instituted more effective patrols to curb illegal forest use. The team is also working to increase community awareness of the value of the forest’s conservation. Focusing on schools, community groups and local opinion leaders, the team is highlighting the value of the forest and the impact different activities have on its sustainable use. Through these efforts, initiatives to encourage the community to plant more indigenous trees have begun to show good results. The best times to visit Arabuko-Sokoke are in the early morning or in the late afternoon. During day, most of the wildlife hide from the heat. The peak of bird activity lasts from dawn to about 9.30 am.

Even though the reserve has no accommodation facilities, there are plenty in the nearby resorts of Watamu and Malindi. For nature lovers, Arabuko-Sokoke is the place to visit. The forest offers more than one can bargain for.