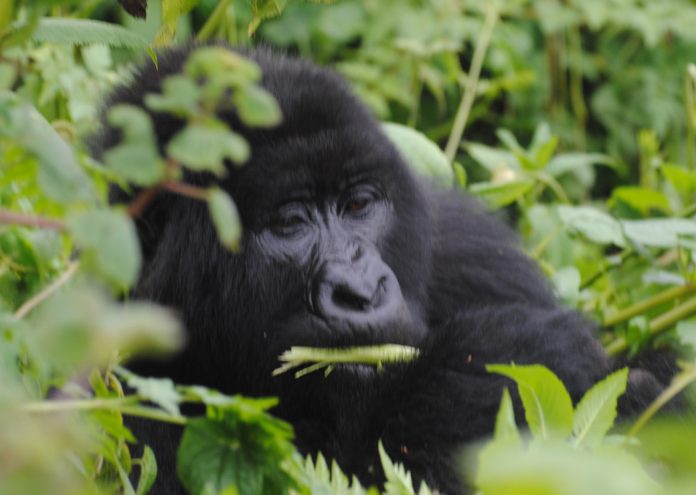 The forest was dim and quiet and our wet shirts clung to our backs in the heat. Charles, the lead tracker, peered down at the paths of trampled vegetation and wiped sweat from his brow with a handful of crushed leaves. “Others were feeding here,” he said, pointing at a sapling stripped of its sweet, green bark, “but our gorillas have gone up”.

We rose to follow with a collective sigh: when mountain gorillas have a choice, they always go up. For nearly five hours we had tracked this family of gorillas, cutting our path through the thick tangle of Uganda’s Bwindi National Park, still known by its former and more picturesque name, the Bwindi Impenetrable Forest.

Nestled among the steep, cultivated hillsides of southwest Uganda, Bwindi National Park supports half of the world’s population of 600 endangered mountain gorillas in a remote pocket of lush rain forest. Two of the park’s 23 gorilla families have been habituated to accept daily visits by small tourist groups. Our party included gorilla trackers, a park guide and six determined British and American tourists, doggedly pulling themselves up the rugged hillside.

As a Peace Corps Volunteer in Bwindi, I worked until last September with the Uganda National Parks and the International Gorilla Conservation Programme (IGCP) to help develop the park’s gorilla tourism project. On this day in August, I was accompanying the tourist group for one of my last visits to the gorillas before returning home to the US. ‘Where’s the Chairlift?’, someone muttered. Gorilla Trekking can be a strenuous hike of four hours or more, and even the fittest travellers rely on anticipation to drive them up the steep slopes. We pressed on, excitement mounting as the gorillas’ bent-leaf and dung trail grew fresh.

Overhead, a tight lattice of vines and leaves blocked all but the faintest rays of midday sun. Saplings and tree ferns vied for the light, and moss, like green water, hung dripping from every branch.

Topping a rise, we came suddenly to the western edge of the forest, a near straight line separating jungle from cultivation along the Zairean border. Thirty miles to the south of the dark, conical peaks of the Virunga Volcanoes loomed over the collective boundaries of Uganda, Rwanda and Zaire. There, contiguous national parks in all three countries protect the forest – home to the world’s only other population of mountain gorillas, separated from their Bwindi cousins by more than 20 miles of intervening farmland.

Charles looked down the hill, squinting in the sunlight, and shook his head with a rueful smile. “Again they are chewing bananas.’ From our vantage on the hilltop we could now see the gorillas clearly. Their dark shapes looked bulky and out of place in the fields, moving slowly among the broad-leaved banana plants. As we made our way down the slope, a farmer called out angrily from above, ‘Your animals, they are bleeding us! What will we eat now?’ One of the trackers went to try to calm the man while we descended to position ourselves near the feeding apes. Bananas are the only local crop favoured by gorillas, but contrary to popular belief, they rarely eat the fruit itself. It is actually the watery core of the plant stem that draws them from their forest home. Stands of banana trees near the forest edge are often destroyed before they ever have a chance to bear fruit.

We watched a young silverback reach up with one huge arm and pull down a 15 foot tree. The tourists gaped and snapped pictures, but he seemed indifferent to the cameras, glancing our way with calm, intelligent eyes, and scratching absently at the long black fur on his shoulder. Then, with a casual flex and a sideways tear of his teeth, he separated the trunk into ropy strands and began chewing noisily.

Occasional belches and rustling leaves revealed the presence of others resting and feeding around us. We couldn’t see them, but we knew who was there: Mugurusi ‘Old Man’, the grizzled lead silverback; Kacupira, ‘Limp’, who had broken his wrist in a fight, or Karema, ‘Cripple’, the calm young male with maimed fingers. Through two years of habituation and monitoring, we had come to know this family of apes by their personalities as well as their physical traits.

So when we heard a sudden grunt and the noise of a gorilla moving our way with purpose, we knew without looking that it had to be Katome, ‘The Small Fist.’

Too young to challenge the groups’ two adult silverback males, Katome is a pugnacious, black-back and the group’s self-appointed watchdog. His habit of screaming and charging to within inches of visitors is not only frightening, it exposes him – and the rest of the group – to a variety of dangerous human diseases. Tourists follow strict regulations to minimise the risk of disease transmission (you won’t be allowed to track gorillas if you have a cold), and maintain a minimum distance of 15 feet from the animals at all times. But convincing a charging gorilla to observe the same rules is another matter altogether.

Today, however, Katome seemed satisfied with a hostile glare, stalking past us like a gunslinger at the swinging doors of an Old West saloon, all chest and swagger and heavy brow. The farmer above us continued working, swinging his hoe at the earth and turning the black soil for a row of young banana shoots. This convergence of forest, gorillas and agriculture is a true microcosm of conservation problems in Uganda, where a rapidly growing human population is pressing right up to the edge of protected areas. Our gorillas had finished their meal and retreated into a thicket between two fields. We inched closer, but glimpsed only shaking leaves and dim shadows in the dense undergrowth.

Spotting them once in the open had been lucky and we were beginning to think our initial views were all we would see, when a small black head suddenly emerged from the greenery. Kasigazi, ‘The Little Guy’, climbed slowly out of the leaves, ascending on thin branches toward a particular tangle of vines. Grabbing at the swaying knot of green, the juvenile ape carefully pulled each strand through his teeth, nimbly picking off the leaves with a snapping sound.

Towering pillars of clouds loomed above the forest as the final minutes of our visit slipped by. Kasigazi was still feeding high overhead and Katome had returned into the open, resting on his back with one leg flung upward like another dark trunk in the shade. Several others had moved into a stand of banana trees farther down the slope and we saw the broad leaves shudder as another stem went down.

“That was the fastest hour of my life”, someone whispered as we slowly backed away and began climbing through the fields. Time with the gorillas is limited to minimise disturbing their natural behaviour, but everyone was still ecstatic, wide-eyed and smiling when we paused to rest on the hilltop.

One of our group wanted to photograph the man planting bananas, but he turned away with a frown and stalked off across the field. Governments can dictate policy, but local people are the ultimate stewards of the forest, and gaining their support is vital for the long-term protection of mountain gorillas.

Heavy tropical raindrops spattered against the greenery and we hurriedly donned our jackets for the long hike back to camp. Suddenly the trackers motioned for silence and pointed down the hillside. Far below us, the gorillas were returning to the forest. They walked hunched forward on their knuckles in a single-file line, ponderous black shadows in the drizzle. Mugurusi, the lead silverback, stopped at the forest edge and seemed to look in our direction while his family slowly crossed the clearing behind him and disappeared, one by one, into a wall of green.

Since this article was written, Mugurusi, ‘Old Man’, the dominant silverback in the Katendegere group which the author describes, has sadly died of old age. He has been succeeded by Kacupira, ‘Limp’.

Thor Hanson
is a freelance writer
based in Bellingham, USA