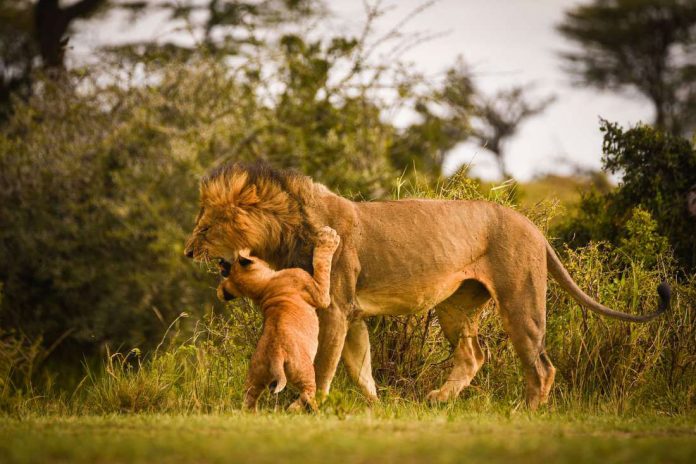 Maasai Mara game reserve is said to host over 10 prides of lions if not more. The African lion in Maasai Mara is famous for its black mane. The mane will usually be golden in the African lion’s youth turning to black as it advances in age. The lions of the Mara will be heard roaring next to your camp where they have marked territories and location.

The prides usually occupy one territory (which might be next to your lodge) and it’s guaranteed that they will always be in those environs every day. The Maasai Mara Africa lion tours safari land park is rife with succession battles between male lions. The dominant male is constantly fending off other challenging males. The male will in most cases be heavily scarred on the face as a result of battles fought and won before.

The Africa lion tours safari in the Mara will find you in the middle of a pride that wants to use your car for shade. They will sprawl underneath and besides your vehicle for hours ignoring your presence. By and large, the Maasai Mara African lion is to an extent used to humans, but that’s not to mean they are any less dangerous. So take no chances.

The lions of Tsavo East especially, are the most dreaded, and were upon which the movie “the ghost and the darkness” was based. The lions of Tsavo killed hundreds of railway workers and at one point halted the construction of the East African railway line in 1890’s. They came to be known as the “man eaters of Tsavo”

The lions here are the most feared and un-habituated due to their limited contact with humans. They are equally harder to locate but more due to the expansive nature of the park. Your tour driver guide in most cases will most certainly know how to locate a pride since they are familiar with their territories.

Nairobi National park is the only wildlife park in the world within capital city boundaries. It is therefore easily accessible and a show case of what other country based lion safari parks have to offer. The African lion prides of Nairobi national park are fewer due to the relative size of the park. They can however be heard at early mornings and late evenings roaring away. It is always an exciting experience in your Africa lion tours safari to see the elusive lions in this park before proceeding to the major national parks in Kenya.

The Meru National park easily holds the number one position of the most remote wilderness areas in the country. The wildlife here, unlike other parks is very aggressive and un-habituated. The African lions of Meru National park compare to those of Tsavo and are as such the most feared. Meru national park however is a darling for tourists in search of virgin natural places in their Africa lion tours safari photo hunt.

Lake Nakuru national park is the most visited park in Kenya. The park is also located 2½ from Nairobi and within the Nakuru town and is host to Lake Nakuru, an important Ramsar site. (An Important water-body equivalent to a UNESCO’s heritage site). The park is famous for the millions of the pink colored flamingo that ring the sides of the lake like one large pink bracelet.

The African lion park prides are easily found and are located in a particular area called the lion hill. L. Nakuru is a very famous park since it also hosts the Black and White African Rhino. The white Rhino populations in the park have improved tremendously and are touted as a resounding success of the rhino breeding programme by the Kenya Wildlife Service.

Let your operator advice you on your itinerary to maximize your Africa lion tours safari experience in Kenya. For sure you will see enough African lions and more of the big five game here. That’s not a fact it’s a promise. Enjoy!