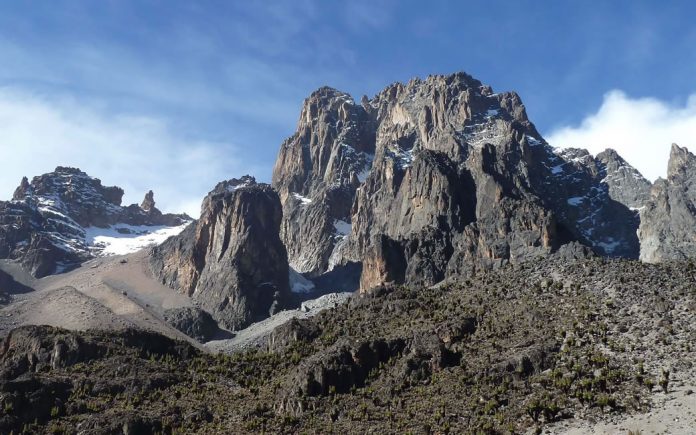 Efforts to rid Mount Kenya of litter left behind by more than 20,000 people who visit its various parts each year are taking on a more earnest approach for the first time. Africa’s second highest peak after Mt. Kilimanjaro faces the serious pollution problem that has confronted similar tourist locations all over the world. The top of Mt. Everest, for example, is littered with frozen bodies of climbers and Sherpas.

On Mt. Kenya, pollution is endangering wild animals and the surrounding natural forest, one of the few natural forests left in the world. Within four days only, a group of four mountain climbers can on average generate 20 kilogrammes of rubbish most of which is scattered on the mountainside.

Students of the Mountain Climbing Club of Kenya have been at the forefront of the clean-up initiative since 1993 when a group of them scoured the Naro Moru climbing route on the eastern side of the mountain which is one of the most popular routes. There are seven routes in all.

From the Meteorological Station where the road ends, the group walked up to the 15,000 feet high Top Hut at the base of Lenana Peak (16,355 feet). Top Hut was filled knee-high with rubbish. Plastic, tin, glass and paper lay everywhere. There was even an oxygen tank. It took 17 students each carrying 15 kilos several strenuous trips to get the litter down to the Met Station.

It took them a day’s walk to get the litter down to Mackinders Lodge – which is between Top Hut and the station – and then another day to walk down to the Met Station to dump the rubbish and back up to Mackinders Lodge. The second leg is a trip that, one way, takes most people a whole day.

This effort complemented in a big way other measures already taken to reduce the litter problem. For example, the Porters’ Association will expel any member who litters or fails to pick up rubbish as directed.

Pits for the disposal of waste were dug at each gate in the early 1980s and free rubbish bags were once handed out to the climbers. These options were rarely used and the warnings often ignored.

The situation had recently got worse and the team of students spent the first two weeks of July last year clearing litter that shouldn’t have been there. This time they went up the Chogoria route on the western side and cleared 34 kilometres as the crow flies. Over 400 kilogrammes of rubbish was collected.

There were 14 students, three of whom were women and two guides, all aged between 18 and 28.

Not only did they clear a lot of litter but they also rehabilitated some of the huts, Top Hut, Kanui, Mintos and the latrines. Austria is raised on stilts and people had thrown their rubbish underneath. To discourage this, the group nailed a metal frame around it.

Climbing a mountain is no small feat. The students had to arrange the time and raise the money. They had 15 sponsors – KWS, Naro Moru River Lodge, UTC, Toyota, Kenya Television Network, Nation Newspapers, the British High Commission, Mark Savage and the Mountain Climbers Club of Kenya, to mention but a few. The operation still cost them US$54 each.

These young mountaineers were not finished with fighting pollution so they arranged a meeting with Mr. Bongo Woodley, the Park Warden. Mr. Woodley said that, as long as there were visitors on the mountain, there would always be rubbish. He said litter bins were decided against because they encourage litter and can be a danger to the animals.

Two solutions are emerging. The first is more vigorous education of visitors on the damage littering causes to the environment. Pamphlets financed by the Mountain Climbers Club of Kenya and the United Nations Environment Programme (UNEP) was to get this programme up and running by the end of last year.

The second plan, which still requires discussion on a wider scale, has been suggested by Mark Savage, a tour operator and mountain climber. At base climbers would be asked to pay Ksh500 ($9) for a gunny bag or plastic bag to put their litter in with the promise of a full refund if their bag is full on return. UNEP has promised to fund such a project. Other clean-up projects have also been done by the British Army, the Kenya Wildlife Service and Nanyuki Mission of Hope.

In addition to the important business of cleaning up, the young mountain climbers have stirred up interest among their own age group. There are now far more climbers from schools than before. Don’t they get tired of cleaning up other people’s mess? Not at all, says one, “It’s our mountain. If we don’t do it, who will? It’s enjoyment too, breathing the fresh air, drinking clean water out of streams and getting away.”