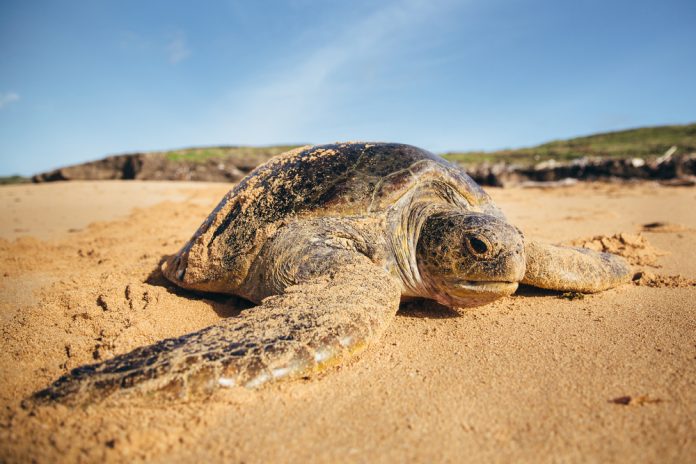 The Kenya Wildlife Service (KWS) is managing a project at the Kenyan Coast in which the local community is involved in efforts to conserve the rare and endangered sea turtles. Measures focus on the protection and management of foraging grounds. Members of the community are encouraged to look out for nests along the beaches and report any sightings to KWS rangers. A person who does so is paid the equivalent of US$12.50, and is encouraged to ensure the eggs are well guarded. A further US$12.50 is paid out when the hatchlings emerge, and 50 cents per egg hatched. Thus a person who finds and guards a nest may receive upto US$32.50 per nest. This is a significant sum given the average fisherman’s monthly income of US$75.

The hatched turtles are then released into the sea by KWS officials in the presence of visitors and local people.

At Bamburi, just north of Mombasa, a private initiative is also being undertaken to protect and conserve the turtles. This Bamburi project has attracted a great deal of interest not only among scientists and the local population but also among foreign tourists. Under this project, hired guides collect turtle nests along the beaches before they can be destroyed or poached and take them to the artificial protected hatchery at Bamburi. When a batch of turtles are hatched local people, tourists and others visiting the project are encouraged to take part in a ceremony releasing them into the sea. Usually between 100 to 300 people take part with each holding a hatchling which they let go almost at the same time. Hotels at the Coast, including Serena Beach Hotel, Indian Ocean Beach Club, Severin Sea Lodge and Sun ‘N’ Sand Hotel are involved in the conservation of the turtles.

At the Indian Ocean Beach Club on the South Coast, Mr. Moses Mwakazi has been spearheading the turtle conservation programme. Since the hotel started the programme in December 1993, 486 hatchlings have been released into the sea after being hatched in nests on the hotel’s sandy beach front.

Like most other private conservationists, the Club uses financial incentives to promote its programme. For example, if a turtle destroys a fisherman’s net they replace it with a new one. The hotel also offers Kshs2.50 for every egg taken there, and Kshs500 to anybody who reports a nest.

Although it is advisable to let the hatchlings go to the ocean as soon as they emerge from the nests, a new programme of adoption through which the hotel raises money for the project has been launched.

This entails the nests being fenced off and the hatchlings collected and kept in a cold dark place until morning when tourists can adopt individual hatchlings before releasing them to the ocean.

It is interesting to note that these projects have so far proved successful because turtles have over the years been of great value to indigenous Kenyan coastal people, especialy the Bajuni, for nutritional, economic and cultural purposes. Traditionally, turtle meat and eggs were eaten, the shell was used as an ornament and was exported, while oil was used as medicine and for “protection against evil spirits”.

But the harvest of turtles by these communities tended to cause little damage to the overall population in part because of the then low human population. In addition, the beliefs and norms in the communities encouraged and even enforced limits to exploitation. However, population growth and changes in economic and social factors have had far reaching shifts in the traditional patterns.

KWS data indicates that sea turtles are widely distributed along the Kenyan coastline within the 20-mile isobar areas mainly associated with sea grasses and coral reefs. Turtles are, however, highly migratory with nesting beaches usually located a long way from the feeding grounds.

The first extensive aerial census of sea turtles in Kenya was carried out in 1994 and revealed a population of just 1,000 to 2,000 reptiles. These include the olive ridley (Lepidochelys olivacea), hawksbill (Eretmochelys imbricata) and the green turtle (Chelonia mydas).

Both resident and visiting turtles are increasingly under threat. The harvesting of turtle eggs, demands for its meat and oil, habitat destruction of nesting and foraging grounds by human encroachment (coastal and tourism development), pollution and beach erosion are all taking a heavy toll.

Another threat is posed by fishing trawlers and drift nets which accidentally catch sea turtles and drown them in fishing gear. Worldwide, an estimated 155,000 turtles die every year in trawlers’ shrimp nets.

Sea turtles are the earth’s oldest living vertebrate animals. They existed 150 million years ago, even before the dinosaur. These giant reptiles have a life span of 50 to 100 years. This makes them important environmental indicators of long-term marine changes. Sea turtles are protected by Kenyan Law, but its enforcement has been so wanting, particularly in the protection of nesting beaches, that their survival cannot be taken for granted.

When local environmentalists recognised the serious danger to the reptile they acted to check and reverse the trend. A Turtle Conservation Committee was formed to generate public support. Members include representatives from the Kenya Wildlife Service (KWS), the Wildlife Clubs of Kenya (WCK), local marine-related institutions, private companies, hoteliers, and individual conservationists. Last October, the committee organized a 350-km walk along the Kenyan coast to raise awareness about the plight of creatures among coastal communities, hoteliers, and tourists.

A team of four “turtle walkers” stopped in several fishing villages and hotels, handing out posters in Kiswahili and English, and showing slides and videos. They also raised money for the “Save the Turtle Fund” which provides incentives to local people, mainly fishermen, for reporting and guarding turtle nests.

WWF was the largest contributor to this fund. Plans are a foot to sustain the fund through exhibitions, T-shirt sales, and direct appeals to donors.

“Why bother with these things?”, a local fishermen asked sceptically at the start of the awareness campaign. “Turtles are swimming all over in large numbers!”

Given the financial incentive, the same fishermen are now the first to report turtle nests to KWS rangers and fisheries scouts. Trawler operators too have been given relevant video films.

Hussein, a lobster diver and coxswain for marine park tour boats, is working closely with a British proprietor of a guest house. He polices a long stretch of beach, and talks to fellow fishermen about turtle conservation. His personal efforts have also paid off. “I found and reported five turtle nests,” he says proudly. That also means good money.

So far the campaign has been a success. The poaching of adult nesting female turtles as well as egg collection which had been rampant, and other forms of turtle exploitation have dropped drastically.

Meanwhile, the Turtle Conservation Committee plans to campaign for legislation requiring fishing vessels to be fitted with Turtle Excluder Devices (TEDS). These devices are specially made not to trap turtles but will catch fish. They have proved to be 97 per cent effective at releasing sea turtles ensnared by trawler nets. The committee is also considering a turtle tagging programme to monitor their movements.

Further, the conservation committee has just produced and distributed teaching kit, for use by environmental educators. Besides providing information on sea turtles, it encourages activism such as writing letters to the Press and Government. Other resources are videos, a slide show, an adopt-a-nest programme, and books. As George Wamukoya, KWS marine botanist and chairman of the committee, says, “Once the children are fully aware of the importance of turtle conservation, they will in turn educate their parents. The parents will then be more willing to share information with us on things such as the traditional uses of turtles.”

According to Mr. Wamukoya, local community participation in the exercise appears to be the only sure way to control wanton destruction of the turtles and their habitat.

“The very nature of participatory activities implies that they will operate at the local level. This will ensure that the project process from indentification through design, implementation and evaluation, involves individuals, local communities, the private sector and government”, he says.

But this, he argues, will only succeed if direct economic benefits are passed on as incentives to the communities involved. And mechanisms are developed that enhance the intergration of local traditional beliefs and practices that have protected the turtles for centuries in the overall conservation and management of the creatures.

Equally important, he hastens to add, is the establishment of mutually acceptable and adaptable systems of dispute resolution in all participating groups, and the setting up of a comprehensive national monitoring system that would be linked to other regional initiatives.

Local scientists recognise that for better conservation of turtles, it will be imperative to collaborate with their counterparts in the eastern and southern African coastal range. Such a collaboration should be geared towards further scientific studies of turtles and the sensitisation of the public. So far, only Kenya and South Africa have conducted studies on turtles yet turtles are known to migrate throughout the region.

If all goes as planned, Kenya’s turtle population should have a very good chance of survival.